This is my second week of treatment and I have booked an overnight hotel for me and my husband. I’ll have a late radiation today at 4:05 PM. We left home with a taxi at 12:20 PM and finally at Sahlgrenska at 3:30 PM  so I had to wait for an hour for a 2 minutes treatment. Then we were brought by a taxi to the hotel, about 10 minutes drive from the hospital. Here we will be staying until friday, just going to and fro the hospital under my treatment. 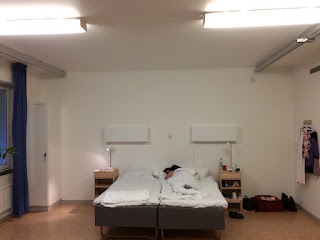 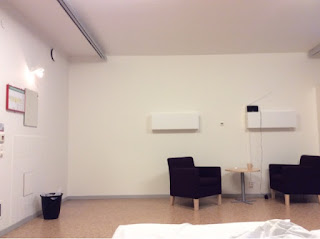 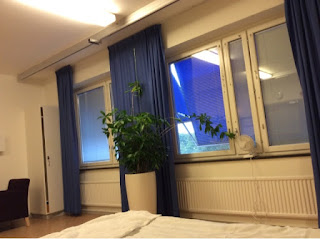 The hotel is on the 3rd floor of Högsbo Hospital. We got a spacious room with a toilet and bath just on the next door. It’s ok, quiet and fresh temporary residence, good food and nice personnel. I don’t have much appetite though but I try to eat so much as I could because I feel so weak at the same time, feels like I haven’t eaten for many days. I feel sick as if I have eaten a lot of newspapers and ready to throw up anytime! I have diarrea too and at the same time hard in the stomach at times. I don’t understand anything anymore.
On Wednesday, the radiation machine at room 9, where I am having my treatment, broke and patients on room 9 must be treated on other rooms. I was treated at room 8. This made a late on the flow in almost 1 hour. My taxi had to pick up other passengers so I had to call for another taxi.
On Thursday was just the same but this time I waited just around 15 minutes beyond my scheduled time and the taxi driver came to pick me up, I was 2 minutes late on the scheduled time. Coming back at the hotel, I felt alone, my husband went home this morning to get our car so we could go for a weekend holiday in the south of Sweden tomorrow afternoon, friday.