Woke up early today, already at 3:50 AM. I was not ready yet but my taxi came already at 4:15 to pick me up. It was booked at 4:30. At Sahlgrenska hospital at 6:20, the ward was still almost empty except for the cleaner, waited until some nurse came at 7. I was fetch by a nurse at 7:20, was given a locker for my things and given a hospital shirt. My nurse at the oncology ward told me that they would use a bigger needle than the first time so I was a little nervous if it would be that painful again.

Resting now in my room waiting for somebody to drive me to the testing ward, located on the other building, about 3 minutes trip with a mobile bed. I got this needle with tube so it will be easier for them to give me any medication on the process. I was given a pill, I guess it was to make me calm because after a while I felt dizzy and became sleepy. 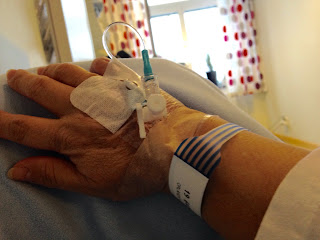 At 8:20 two nurses came to pick me up. They drove me to the testing ward with the mobile bed where I would have a biopsy. Six nurses and anesthesiologists took care of me. I got medication through the needle in my hand. I got an oxygen tube in my nose, ECG tubes and another that was monitoring my blood pressure and the dextrose since I haven’t eaten anything since last night. I felt so tired and sleepy. I could hear and answer their questions but I had my eyes closed. I felt dizzy and felt no strength to open my eyes. It was very strange feelings. I was sleeping but in any way I was aware of what was happening. I felt I was put in and out in round machine just like the magnet scan machine. I guess they were taking picture on where to stick the needle to get tissue samples.

First they applied something cold, I guess it was disinfectant and then gave me injections with anesthesia. And then told me to stick the needle, I guess twice or 3 times, I was not so sure how many times they did, but more than once I’m sure. As I said I was conscious although my body fell asleep, so strange! I didn’t feel any pain only some clicking when they stick in the needle.

After a while I was put on a waiting room while I was still sleeping but I know anyway that they took me to another room which is the waking room. I was cold and feeling sick and I got a warmed blanket. I was driven back to the oncological ward at 11:30 AM and there I continued to sleep. My nurse woke me up and ask if I want something to eat. She gave me a sandwich and a glass of juice. Then I took another nap. I felt sick! I could feel saliva flowing in my mouth but I was too tired to get up and spit it out so I swallowed, then I fell asleep.

At 2:30 PM they brought me to the x-ray room to check that my lungs were all right. I was put back to my room after a while and there another nurse took care of me. She asked if I wanted something to eat. I was not feeling so well and I got a headache. I guess because of hunger but I was not longing for something. A yogurt maybe and a cup of coffee since I haven’t got any coffee for today. I used to get a headache if I miss my morning coffee. I felt sick and went to the toilet to vomit. Since I haven’t eaten so much so it didn’t come out so much, just had a lot of saliva flowing out from my mouth and a little sour something. Going back to my room I tried to eat the yogurt just to get back little strength. The result will be available next week. I really hope they could give me a diagnose then, I am really worried.
I x-ray result was good so I could go home. My nurse ordered for a taxi which will be coming to pick me up at 4:30 PM.

It was a very bad driver in deed! Sudden breaking, overtaking and such things, talking in the phone all the way and I was so afraid, it was snowing too. I even suspected that he was even having a telephone sex on the last phone call since he was whispering and I could hear a woman’s voice screaming, I don’t know…
I was finally at home at 7:30 PM very tired and still sleepy.

You may want to read my first biopsy here

One thought on “Second Biopsy”